Does it Count as Book Burning When it is a Book of Legal Citation Formats?

A prominent US Circuit Court judge, Richard Posner, has advocated burning the Blue Book: A Uniform System of Citation, which has long been the bane of existence for first year law students. According to Paul Caron of the TaxProf Blog:

In general, I am strongly opposed to book burning of any kind. But in this case, I can only say, burn, baby, burn! Like Posner, I have long argued that the Bluebook and its hundreds of pages of useless, time-wasting rules should be abolished and replaced with a much simpler citation system, perhaps similar to those used in other academic fields. It would save lawyers, legal scholars, and law students enormous amounts of time and effort.

Judge Posner has developed an alternative simplified system which is linked in the article. See the entire article here.

Below is a photo of my own copy of the venerable fourteenth edition of the blue book, which I haven’t burned yet. 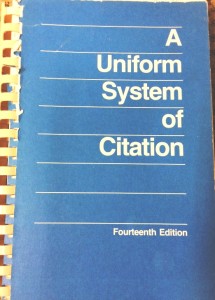 This entry was posted in Law, Uncategorized and tagged A Uniform System of Citation, Blue Book, Book Burning, Judge Posner. Bookmark the permalink.